Tsaagan Sar was a wonderful success. The translation for “Tsaagan Sar” is “white moon. It’s typically a week-long, or if you live in more rural parts of the country like me, two-week long, celebration of the lunar new year. Mongolians celebrate by visiting the homes of everyone they know and eating and drinking copious amounts of food and vodka. I started off strong, tagging along with my friend Saraa and her husband on the first day. We visited eight of his nine sisters’ homes. Each visitor gets a gift, so I came home that day with a ton of swag, mostly trinkets and candy. In Mongolia, the act of gifting bears more importance that what the gift actually is.

At most social interactions with more than three or four unfamiliar Mongolians, I’m usually pretty silent. I’ll throw in a few phrases here and there when I can catch a word, but usually it’s just smiling, laughing and drinking vodka when its passed to me. Which happens a lot. I wore a Mongolian traditional dell made for me by my school’s training manager. I didn’t get much say in the choice of colors or fabric, but I just trusted that it would be as beautiful as it did end up being.

On the third and fourth day, I visited other houses sporadically and ate more mutton buuz. I got calls from my host family with the typical greetings and a talking-to from my mom for not calling her more. Again, it’s the act of the calling, not necessarily the content. Even with the language barrier slowly lifting, we still don’t talk about anything besides the weather, how my work is, and how she misses me.

On the fifth day, I woke up to a call from my friend telling me to get my booty over to school as soon as possible. After four days of force feedings of buuz, potato salad, mutton and vodka, I knew to keep my stomach empty. When I got there, our auditorium was filled with teachers in their dells. When greeting people in the lunar new-year, Mongolians place their arms and hands either above or below the others’  arms and smell on the right and left. Smelling is the equivalent to Europeans kissing each cheek when they greet each other. I never knew about it until my host dad breathed in my forehead for a lengthy and uncomfortable duration of time when we first met. I find it so endearing, though, watching a Mongolian mother rock her baby side to side while smelling the top of their head. While we greet during Tsaagan Sar, we say “Amar bain uu” which doesn’t have a literal translation that makes sense so I’ll just say, “how is your rest?” We followed through with the typical Tsaagan Sar proceedings with buuz, milk tea, mutton and candy. 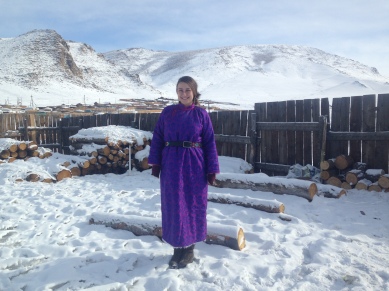 I was surprised when a lama walked into the room. Mongolians have this special mixture of brooding strength and spiritual delicacy. He had big handmade boots with up-ward curved toes, and his crimson dell was thick and worn. He was a lama, but also very, very Mongolian. He sat at the head of the table with the tower of breads, candy and aarul (milk-curd candy) next to our director. He started chanting, and teachers who were Buddhist held their hands together up to their hearts. Afterwards, he blessed a bowl of rice, which we then each took a bit of and held in our hands and moved in horizontal circles as he chanted and ran a bell to bring in the new year. He then blessed us individually. I walked home with the biggest, dorkiest smile on my face. Not because I had the opportunity to be included in such a beautiful ceremony and celebration, but that I was welcomed so graciously. It can be difficult to be away from home for so long, but the inclusion in such intimate events with people I’ve learned to love so much has warmed my heart, enough to dilute any sort of negativity.

After Tsaagan Sar, I organized creative writing competition for Zavkhan and managed to motivate my counterpart to mobilize our disabilities community.

Our aimag is acknowledged as the least developed in all of Mongolia, with only two secondary schools offering one or two classes for children with intellectual disabilities. Zavkhan also just has very little infrastructure, and it doesn’t help when most of our youth are looking for opportunities in Ulaanbaatar, the capital city, or internationally.

Some aimags have disabilities centers with updated registries. According to two sources, Zavkhan has about 63 or 100 people with disabilities. With a little over 10,000 people living here, I find that number.. hard to believe. Together with my counterpart we called a handful of the numbers from these lists, but the numbers weren’t updated or correct. We ending up finding a parent in charge of an alliance for parents of children with disabilities and invited her and any other willing parents and children to travel to Khovd for the first-ever Western Regional Winter Special Olympics. Another volunteer in Bayan-Olgii talked to the director of Special Olympics Mongolia in January who very much wanted to have a Special Olympics the very next month. She was sure that it would be possible. So we went forward with it.

In America, that’s impossible. In Mongolia, everything gets done at the last minute, but having a week or two off for Tsaagan Sar keeping me from finding athletes, organizing transportation, and raising money to pay for that transportation sent me into that crazed and over-worked reporter mode I don’t miss so much. It was hard not having a community that supports people living with disabilities, but the parents’ enthusiasm kept me going. Typically, people living with intellectual and physical disabilities might attempt to get a formal education, but fall behind and are forced to drop out. Most end up staying at home all day with family members that take care of them full-time. So the celebration of disabilities with the Olympics might be something of a revelation. I worked together with my school’s social worker to organize the logistics, and he ended up being perfect for the job. His passion mirrored mine and we were finally on the same page for the first time. Tomorrow morning, we’ll all leave for Khovd, which will take about 12 hours or so. I’m not looking forward to the journey too much, but I’m looking forward to sharing my disfigured vegetarian buuz for the road.